The Archeological Society of Virginia held its 2001 annual meeting at the Patrick Henry Inn in Williamsburg, Virginia. The meetings were a great success with more than 100 participants and included discussions on the State Plan and State Archaeologist position, many research paper presentations, a field trip to Kittiewan Plantation to see the new ASV library, the banquet and speaker, and the membership and board meetings.

The Friday session was organized by the Council on Virginia Archaeologists. The morning session was dedicated to discussion on the state plan. Progress was made on several fronts including that the plan was possible to write with limited funds, it should be organized by physiographic province and/or river drainage, and that it was of extreme importance in the research and management of Virginia’s archaeological resources. The COVA membership meeting was held in the afternoon with a variety of issues discussed including the protection of site locations, the state archaeologists position, awards, new members, and plans to invite the National Park Service to make a presentation at the winter meeting on archaeological management of parks within the state. The evening session was made up of presentations by Eric Voigt on Brooks Run, Chris Stevenson on Fort Christanna, and Lisa Fischer on excavations at the Williamsburg theater. The presentations were followed by a reception sponsored by COVA.

Saturday afternoon and evening were equally well spent. After the conclusion of the papers for the day, a field trip to Kittiewan Plantation on the James River took place. Both the 18th century plantation house and the Visitors Center/Museum were open to a tour by ASV members. The plantation house is renowned for its original wood paneling and is now becoming well known for its collections of tools, quilts, toys, dolls, bottles, architectural materials, furniture, and other elements of material culture. The owner, Mr. William Cropper, was present and kindly addressed many points of Kittiewan’s past history and future plans. The ASV library/museum was open to the membership for the first time and the room and exhibits were well received.

The Saturday evening banquet was well-attended with more than 90 individuals. Awards were made by COVA with the Sherman Award going to Mr. Charles Carter of Shirley Plantation and the Hoffman award presented to Stockner Excavation Company for their work at the Carroll County Courthouse. The ASV award for the Professional of the Year went to Carole Nash and the Amateur of the Year was George Ramsey. Presentations were made to those who had completed the ASV/COVA/DHR Certification program and included for 2000 Al Pfeffer and Howard Reblitz and for 2001 Bruce Baker, Kathleen Baker, Chandra McPherson, Steve Thomas, and Faye Wade. The Howard A. MacCord banquet speaker was Dr. Helen Rountree, well-known Virginia ethnohistorian, whose captivating talk addressed the need for an extensive Native American excavation for 2007. The banquet was followed by the Jack Hranicky Philosophical Session where much philosophizing was implemented. 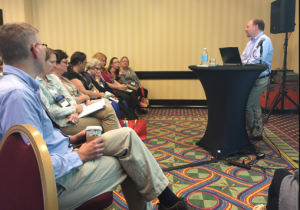 The ASV Membership meeting and the ASV Executive Board meetings were also held in conjunction with the annual meeting and the business of the Society carried out. Following the papers on Sunday morning, two Certification lectures were presented. Keith Egloff of the DHR began the afternoon with a program on Recording Sites in Virginia. This was followed by a presentation by Mike Madden of the Forest Service on the Production and Dating of Glass Bottles. A broad range of individuals made the meeting such a success. Thanks go to Carole Nash for organizing the COVA Friday events and the Friday night presenters and to Barbara Heath for organizing the reception. Thanks are also extended to the session moderators and paper presenters. Mr. William Cropper, longtime ASV member, is thanked for graciously allowing the ASV to visit his home at Kittiewan and for housing the ASV Library/Museum. Thanks are also extended to those who made the field trip a success. Congratulations go to the individuals who have successfully completed the Certification Program. Helen Rountree is recognized for her intriguing banquet speech and focus on 2007 archaeology. Harry Jaeger and all who organized and ran the Book Room are thanked. Ted Reinhart’s and Ed Bottoms book donations are appreciated. Keith Egloff and Mike Madden are thanked for their continued dedication to the Certification Program. Special thanks go to Royce McNeal, Arrangements Chair, who out organized Martha Stewart, and Randy Turner, Program Chair, who put together an excellent program of presentations. Those of you who attended, I am sure you had an enjoyable weekend; for those of you who did not make it, you missed a good one. Hope to see everyone in Radford next October.