Virginia has a nickname, which is ‘The Old Dominion State’. It got its statehood in 1788. There is some interesting history about the place too. Jamestown was the fisrt English Colony in the Unites states was founded in Virginia in 1607. Thomas Jefferson who wrote the Declaration of Independence was from Virginia. After the Revolutionary War, Virginia was declared the 10th U.S.State. Virginia had a key role to play during the civil war too. Virginia got it’s name from Queen Elizabeth I. She was also called the Virgin Queen.

Understanding the land and terrains

Virginia has MaryLand in the north, Atlantic Ocean and Washington D.C. in the east, Tennessee and and North Carolina in the south and West Virginia and Kentucky in the west. 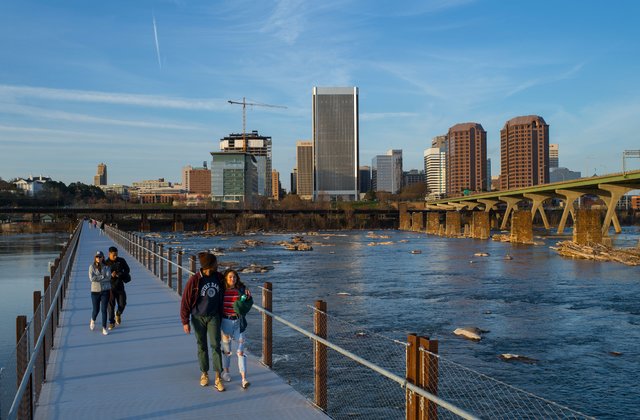 Virginia is made up of five different geographical areas. On the west most is the Appalachian Plateau. here you will notice it filled with forests, rivers and rocks. Keep moving east and youll get to the Appalachian Ridge and valley, which is filled with, sink holes, natural bridges and caverns. This is where the Shenandoah National Park is. Moving a bit more east you will find the Blue Ridge. This steep portion of the Appalachian Mountains and has steep peaks and deep ravines. Mount Rogers, which is Virginia’s highest peak, is found here. Then comes the plains, Its called Piedmont and spreads across central Virginia, has swamps and salt marshes that reach up to the ocean.

Wildlife in Virginia is quite varied. You can find mammals like black bears, opossums, flying squirrels and Appalachian cottontails, birds like bald and golden eagles, falcons, piping plovers and seagulls. Virginia has over 28 species of frogs and a variety of reptiles like the poisonous northern copperhead, bright red northern scarlet snake and eastern glass lizard to name a few.